Through civil lawsuits, we have obtained corporate records and other evidence that reveals a concerted effort by the Boy Scouts of America and many of its local councils to prevent the public, including Scouts and their families, from discovering the widespread child sexual abuse epidemic in Scouting.

New York Times reports on the Ineligible Volunteer file in 1935

In 1935, the New York Times first reported that the Boy Scouts of America maintained what they called, the “Ineligible Volunteer” file system to track “men who were dismissed from the service for cause.”  At that time, the file included 2,919 such men, including approximately 1,000 men who were removed from Scouting because, “when they get into boys’ work, undertake to deal with sex matters and become morbid on the subject and sometimes give way to temptation and develop practices which make them degenerates.”  The files relating to men who were removed for molesting children were referred to as the “perversion files.” 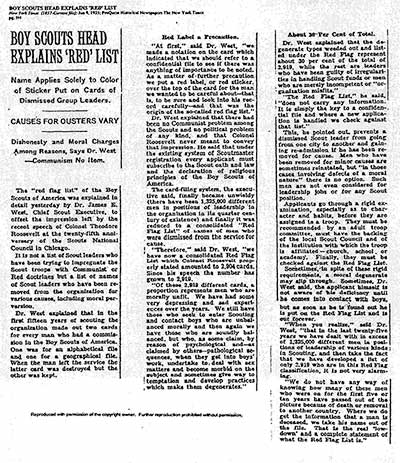 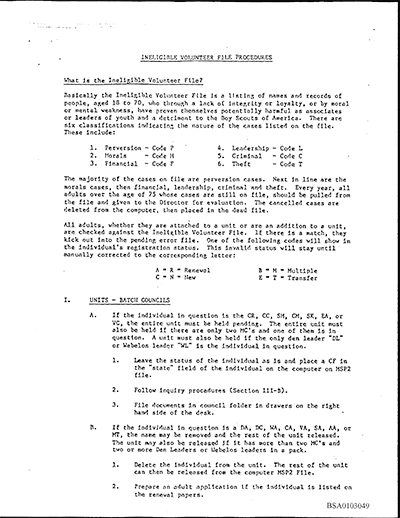 A page from the BSA's Ineligible Volunteer Desk Manual

In fact, for decades, BSA consciously chose not to tell Scouting volunteers or the public, let alone Scouts and their parents, of the issues it was dealing with nationwide regarding abusive Scout leaders and child sexual abuse.

In December 4, 1972, the Boy Scouts of America’s lead executive in charge of the files, Paul Ernst, sent a “personal and confidential” letter from BSA’s headquarters to “all Scout executives” with the subject “Maintaining Standards of Leadership.”  Ernst informed his Scout executives that he was enclosing guidelines that were “carefully developed” by BSA, but “because of the misunderstandings which could develop if it were widely distributed,” he instructed them to avoid sharing it “beyond the top management of your council” (emphasis in original).  In other words, BSA was sounding the internal alarm, but was doing nothing to warn volunteers, parents, or children of its problem. 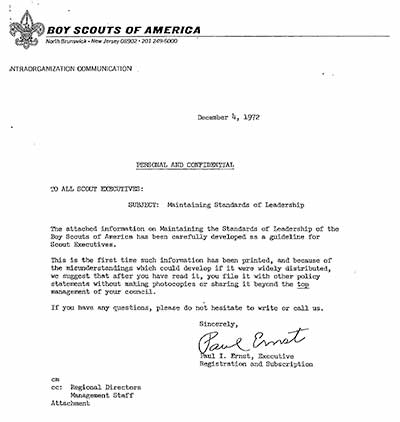 In fact, BSA has admitted under oath that there were no written materials disseminated prior to 1988 to advise non-professional Scouters about the Ineligible Volunteer Files and the dangers of abusive Scout leaders.

Likewise, BSA’s policies and procedures disseminated prior to 1988, such as the 1984 Securing a Scoutmaster form, the 1985 Selecting a Cub Master packet, and the 1987 Troop Committee Guidebooks, omit any mention of child sexual abuse, how to recognize it, or how to respond to it, even though these same materials profess that the sponsor organization and Troop Committee’s “most important job” is selecting a Scout leader because he “will influence the life of every boy in your pack.”  BSA failed to even acknowledge child sexual abuse on its list of society’s “unacceptables” until 1988, the same year BSA first published “How to Protect Your Children from Child Abuse and Drug Abuse: A Parent’s Guide.”

Most Abuse Victims do not Report

As a result of BSA’s decision to “do nothing” for decades and decades, thousands and thousands of boys were molested by their Scout leaders.  According to Dr. Janet Warren, a Professor of Psychiatry and Neurobehavioral Science who was hired by the Boy Scouts of America to review their files dated between 1944 and 2016, the majority of the Ineligible Volunteer files were created to track child molesters, known as the “Perversion” files.   In her review, Dr. Warren identified 7,819 perpetrators in the Perversion files believed to have been involved in sexually abusing more than 12,000 Scouts.  However, due to the nature of sexual abuse injuries, many experts believe that the number of boys abused in Scouting is likely much larger because most abuse victims do not report.