In around 1920, soon after the Boy Scouts of America (“BSA”) was formed, the organization began keeping files on adult leaders and volunteers who were alleged to have committed various crimes and offenses. The files are known today as the “Ineligible Volunteer” or the “I.V. Files.”

The I.V. Files are made up of six categories of offenses including Perversion, Morals, Financial, Leadership, Theft and Criminal. By far the largest category is the Perversion Files, or “P Files” as the BSA internally refers to them. The Perversion Files contain the names of adult leaders who have been accused of, or convicted in a criminal court of, molesting or otherwise sexually abusing Boy Scouts.

The information in the Perversion Files concerns allegations of child sexual abuse. In a number of the cases, the allegations were later substantiated by court proceedings. However, in a great many cases no such substantiation ever occurred.

The first page of each I.V. File is a “Confidential Record Sheet,” which provides basic background information on each individual. The information includes the individual’s date of birth, daytime job, and most importantly, his troop number and the basics of the allegations of abuse.

The following information was taken directly from the Ineligible Volunteer file of Brian Paul Longeway. If you continue to scroll down on this page, you will be able to view the entire file and/or download the entire file. If you have any problems downloading or viewing the file, please contact us.

According to BSA’s records, Longeway is alleged to have sexually abused dozens of Scouts in multiple troops in Pennsylvania, Wisconsin, and beyond.

In 1970, it was reported that Longeway molested boys on a camping trip.  According to the BSA’s records, Longeway was immediately removed from Troop 90.  But just two months later, Longeway became the Scoutmaster of Troop 135 in neighboring Parkesburg, Pennsylvania.

In 1971, Longeway was again removed from Scouting after reports of abuse surfaced.  But the following year, Longeway became Scoutmaster of Troop 1018 in Marinette, Wisconsin.  In 1973, he was again forced to resign and was placed in the Perversion Files after Boy Scouts reported that he sexually abused them.

Despite being removed as a Scoutmaster three times in three years due to sexual abuse, Longeway continued to obtain leadership positions in Scouting.  According to the BSA’s records, in 1974, Longeway served as Den Leader of Pack 20 in Boonsboro, Maryland, as Scoutmaster of Troop 58 in Downsville, Maryland, and as a member of the Washington County District Committee.

In addition, as late as 1980, BSA’s records indicate Longeway may have been involved with Boy Scout Troops in Port Matilda, Pennsylvania (Keystone Area Council) and DuBois, Pennsylvania (Juanita Valley Council) It also appears he was involved in Scouting with the South Florida Council.

Despite multiple complaints of abuse, there is no documentation that BSA ever reported the complaints to law enforcement prior to 1992 when Longeway was criminally prosecuted for sexually abusing a seven-year-old boy.  According to newspaper reports at that time, Longeway was working as a middle school science teacher and was believed to have abused up to 50 boys. 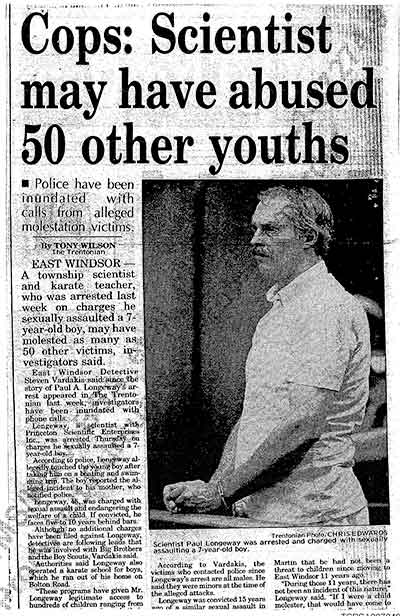