In around 1920, soon after the Boy Scouts of America (“BSA”) was formed, the organization began keeping files on adult leaders and volunteers who were alleged to have committed various crimes and offenses. The files are known today as the “Ineligible Volunteer” or the “I.V. Files.”

The I.V. Files are made up of six categories of offenses including Perversion, Morals, Financial, Leadership, Theft and Criminal. By far the largest category is the Perversion Files, or “P Files” as the BSA internally refers to them. The Perversion Files contain the names of adult leaders who have been accused of, or convicted in a criminal court of, molesting or otherwise sexually abusing Boy Scouts.

The information in the Perversion Files concerns allegations of child sexual abuse. In a number of the cases, the allegations were later substantiated by court proceedings. However, in a great many cases no such substantiation ever occurred.

The first page of each I.V. File is a “Confidential Record Sheet,” which provides basic background information on each individual. The information includes the individual’s date of birth, daytime job, and most importantly, his troop number and the basics of the allegations of abuse.

The following information was taken directly from the Ineligible Volunteer file of Linwood M. Culpepper. If you continue to scroll down on this page, you will be able to view the entire file and/or download the entire file. If you have any problems downloading or viewing the file, please contact us.

In 1963, Linwood Culpepper was the Scoutmaster of Troop 367 in Virginia Beach he was convicted of offenses stemming from contributing to the delinquency of a minor.  According to the BSA’s records, he was sent away for “treatment” related to his actions.

But in 1973, Culpepper was allowed to rejoin Scouting on a “probationary basis” because “so much time ha[d] elapsed”  since his 1963 criminal conviction.  Shortly thereafter, in 1974, Culpepper was forced to resign from his involvement with Troop 362 after a number of children, including Scouts, reported that he sodomized and molested them.

In response, the Troop Committee Chairman misled the parents, stating “I can offer no reason why the National Headquarters warning scheme was not activated in this case.”  Salomon failed to mention that BSA knowingly allowed Culpepper back into Scouting despite his past child sexual abuse criminal.  The records suggest this was not a mere oversight, as it is clear BSA was concerned about possible legal liability: “Fortunately, the newspaper at our request printed some amplifying remarks on Friday morning which greatly serves to take the troop off the hook since none of the offenses occurred on official troop outings.” 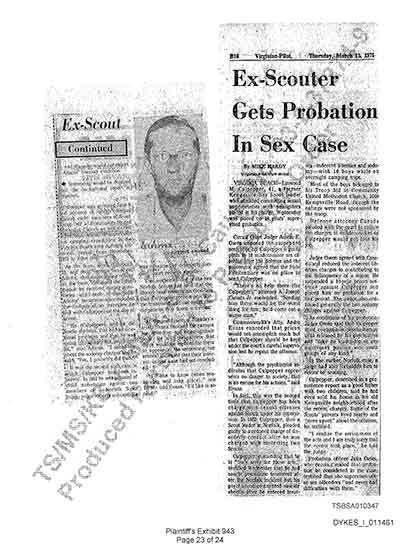